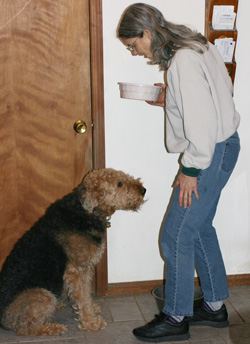 “I have a one year old Airedale. Since the day I brought him home he has always been a growler. He growls when you pet him at night, growls when you try to hug or touch him. I thought that this was just his way but I read an article that says it is a sign of lack of respect. Is there anything I can do about it?”

This was a note I received and it made me think of my own Airedale, Alice. Don’t get me wrong - Alice is a good girl, but she is a dominant Airedale and definitely “pushy”. She tries to get her way by growling and grumbling or by leaning on me or pushing the other dogs out of her way. When I first brought her home, she would put her feet on the counter and her nose in her bowl before I even had a chance to put it down for her. I decided early on in our relationship that I needed to establish myself as her leader before things got out of hand.

Before I talk about some simple things you can do, let me talk a little about what some people think it takes to be a leader to your dog. Some people think it means that you need a big booming voice that can bark out orders and a stern no-nonsense attitude. Other people feel that they don’t want to provide leadership - they only want to provide love. Still others feel that they don’t have the personality for it. Regardless of how you look at leadership, there are a few really simple, effective things you can do with any dog. 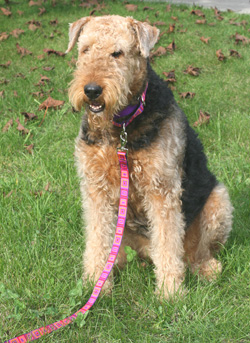 Now back to Alice. To teach her that I was her leader, I made her work for anything that she got starting with food. This included not only her meals, but her treats as well. She had basic obedience skills and knew “sit” and “stay”, so I asked her to do so while I was preparing her meal. She had to stay in her “sit/stay” until I put her meal down and released her. Sometimes I waited several minutes before releasing her. Sometimes I released her right away. Either way, she needed to pay attention to me to know when she can eat. I did the same routine for giving treats. Alice had to sit and wait along with our other two dogs to get their treat. I also extended this to Alice’s walks. Alice will go nuts when she knows it is time to go for a walk, but I made her sit before I put her leash on. She also had to sit before I opened the door to go out. Alice now knows that she needs to work for what she wants.

Another little tip to pass on is to those who only want to provide love to their dog. If you happen to have a dominant dog, consider asking them to sit, then give them some scratching and loving. When you do, make sure you stay positioned so that you are higher than they are. To get on the floor and play with your dog at their level lowers your status in the pack and gives a dominant dog an opportunity to take over.

The ATCA Rescue & Adoption Committee maintains and updates a network of contacts across the country to aid in the re-homing of purebred Airedale Terriers who are lost or abandoned. These contacts are volunteers located in several states, as well as Canada, working to help Airedales in need, adopting them to permanent loving homes.