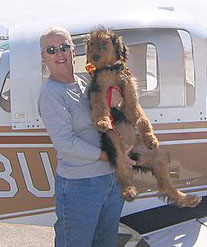 I'm not good with time but I remember that it was over 18 years ago when I got my first Airedale.  He lived to be 17 and was the Howard Hughes of Airedales in his last years; but still on duty at the ranch as sentinel right up to the day before he passed.

I was the CEO of a fairly good sized Corporation with three major holdings and we were breeding, training and showing Quarterhorses and Paints when I got my Monte to help watch our stallion when we were on the road.

I was forced into retirement with a non-compete clause when I sold the Corporation's assets so that my business partner could take a seat on the state's Supreme Court.  With that I found myself looking for a grooming table for Monte.  I found the name of Melissa Moore and contacted her in Arizona.  She told me where to look for a good buy on a grooming table and then asked me if I could check on an Airedale who's master had passed away.  I went to the Animal shelter and found this girl cowering in the back, shaking, in the company of an Akita and a German Shepherd Dog.  I couldn't get her out of there fast enough and I slept with her for the next three nights, on the bed in the guest room, before she even thought of feeling the least bit uncomfortable from what all had happened to her.

That was the beginning .... a grooming table.   Now, some six banker's- boxes- full- of -Rescued -Airedales later I think of all the chance meetings I have had with some of the most wonderful Airedales you could ever ask for ~ all in Rescue through no fault of their own.

I think of the ones who lived their lives out with me and the ones who have allowed me to meet wonderful people.  I think of the times I have divided my hallway up with baby gates to make it possible to feed 16 Airedales in their own space.

And then I realize .... I haven't said very much about me ~~ I have become the Erma Bombeck of the Airedale world ;-)

I have a husband of  35 years and two daughters that are now 28 and 30 years of age (one is a violin teacher, the other a Visual Presentation Expert for the Courts).  I have a small ranch in Las Vegas, Nevada and a 100 acre soon -to -be ranch in Tijeras, New Mexico.  I am a volunteer with SouthWest Airedale Terrier Rescue Group (SWAT) that covers Arizona, Nevada, New Mexico, and Utah.  I am a volunteer with National Airedale Rescue, Inc. as their Treasurer.  I still work as a consultant with clients in different parts of the world and numerous clients in Nevada.  Rarely is my house clean!  I used to have red hair. (thus being named Rusty as a newborn).  I NEVER know what tomorrow will bring.
Joomla SEF URLs by Artio