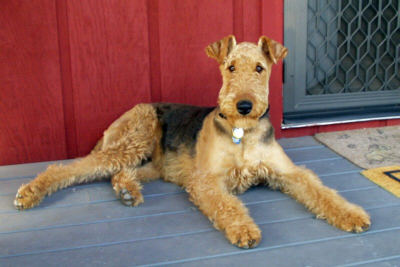 At 1 year old, Zoee was a big (65#), strong puppy who had never been given the training she needed and had completely overwhelmed her owners. Luckily, what was a trial & tribulation to one family was an exciting challenge to another. When Zoee was delivered to her new family by Airedale Rescue, she was housetrained, knew "sit," was ball crazy, loved to fetch and play tug, and was crate trained. Other than that, she had every bad habit known to man.

The first day I took her out, she lunged at a golf cart just past our view fence, and I found myself lying in the stones!!! Nothing was safe in the house....she was a trash hound, barked at everything that moved or didn't move!, countersurfed, had a mouth fetish (everything went in her mouth and she would eat it if we didn't get it away from her!) Zoee was an expert at begging at the table. Who could resist that irresistible face & deep brown eyes?? She was a master at opening cupboard doors, sliding doors, and anywhere else her big ole square nose wanted to go! When I tried to fit the harness on her for the car, she would have none of it.....biting me as well as trying to chew the harness up. She was an absolute beast, screaming and biting us when we tried to clip her nails!!! Our neighbors all thought we were killing her!

Zoee loves my two 4 yr old grandsons, and is so great with them. Since I babysit them a lot, this was an earlier concern. She loves to run out each morning to get us the paper, previously she loved to eat ALLLL PAPER. My husband thought I could never teach her to get the paper, but I've always taught all of my dogs this daily chore. Everyone is amazed when she's in hot pursuit of a bunny a block or so away from me, and I can call her off, and she'll run right back to me......saying, What do you want? Zoee drops anything in her mouth on command. No, she's never actually caught a bunny!!! She loves to ride in my back seat with her harness & seat belt on, she hands us her paw to have her nails done.

I only wish her previous owners could see her now!! Then they would know how important early training is on a dog like Zoee!! She is so much happier with herself, and knows her limits. She's almost childlike in her expression, when she comes over and says, "Can we go now, can we, can we please?" Before training, she DEMANDED EVERYTHING, it's just an amazing difference. She's still a clown, loves to play, and makes us laugh. So we've done nothing to mess up her wonderful personality, she's just so much better!!!

Carole and Al and Zoee
Arizona