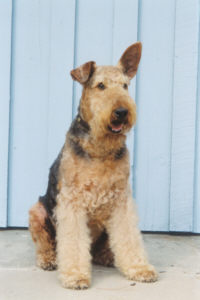 October, 2001, a frantic call was made to a friend of June Dutcher who was also a Rescue Volunteer: "I'm looking for June Dutcher. My son bought this dog from her, and she needs to take him back NOW, as he is in danger." June would have taken him back, even after nine years, but she had returned to her spirit home in July, 2001. 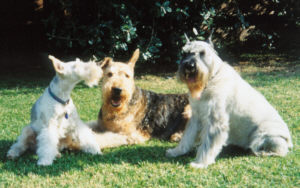 The future foster Mom, and soon to be Forever Mom, immediately went to meet Watson. His beautiful, soulful eyes and big heart were shining through a very bad haircut, a very bad back in which he struggled to stand from lying down, and a darling, innocent six year old girl hanging from his neck. The little girl put him through his basic obedience commands and showed me a few of the tricks she had taught him. He followed this with big, slurpy kisses all around. His manners and obedience training were impeccable. He didn't bark or dig (was this an Airedale???), and he lived peacefully with the family cat. His bags were already packed, and since the underlying threat was a one way trip to the Vet, Foster Mom took Watson and drove sadly away as his little girl waved from the driveway.

THE MYSTERIES: How could anyone return or threaten to destroy this gentle, beautifully mannered, sweet, laid-back fellow after sharing his love and companionship for nine years?

How could anyone tell his six year old daughter that her beloved companion and protector had to go because "I want to re-landscape the back yard and there is no place for Watson now?"

By Christmas of 2001, Watson's foster home had become his Forever home. Having shed 10 extra pounds with a progressive "Walkies" program, he no longer had any back pain and could easily walk a mile in his park, teasing the squirrels and gophers along the way. He even stared down a coyote that dared to venture in to "his" park. With a decent haircut and a proud, jaunty gait, he turned the heads of all who saw him. He charmed all who met him with his silly grin, goofy left "antenna" ear, and heart of gold.

It will remain a mystery how anyone could have abandoned dear Watson. He lives happily ever after in his forever home, sharing it with his girlfriend, Bette, a 13 year old Rescue Standard Schnauzer, and shows infinite patience and amusement at the antics of his boss, Torie, a 14 year old Rescue Wire Hair Fox Terror (not a typo). He spends his free time waiting for tangerines to drop from his neighbor's tree, raiding his Mom's tomato patch, stealing carrots from the fridge, surfing the counters for snacks, and smiling nearly every minute of the day. His Mom truly believes he is a gift from June and is forever grateful. His Mom's heart is filled with love because of him and she believes that Watson, the Mystery Man, is the perfect Airedale.