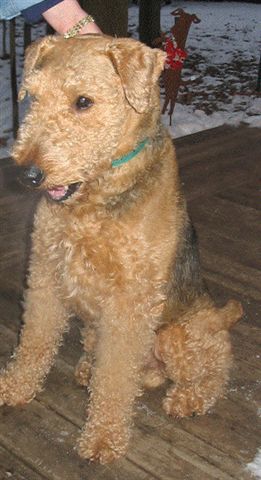 The ad in the paper said 8 yr old Airedale needs new home. Andréa Denninger contacted ATRA [ Airedale Terrier Rescue Association, Inc. ] and Paula Lackner of ATRA called and was told he had been placed, but she left her number anyway. A week later the call came in--he isn't working out, come get him ASAP. So Andréa picked him up and took him home. He was an unaltered male that liked to mark inside. Through creative measures that was curbed immediately. He didn't get along with one of Andréa's dogs, so Jim Lackner picked Eric up and delivered him to his new foster home with Renee Jacobson. Renee fell in love with Eric, as he was such a sweet, loveable fella. He was set up for neutering and removal of some lipomas. All surgery went well and he came home with Renee to recuperate. He moved right in and made himself at home with the resident animals and Renee's human family. A forever home was found and he would soon be leaving for doggy paradise of 2 acres fenced with 2 Airedales in residence. About 6 days following his surgery one of his cysts was oozing and Renee took him back to the vet. The vet said the lump needed to come off that day and surgery was done. Unfortunately, Eric suffered a massive internal problem (possible spleen cyst rupture) and Renee lovingly helped him across the Rainbow Bridge. For the short time he was in rescue he touched many hearts. Thank you Renee for sponsoring this lovely rescue boy.