Because of National Airedale Rescue's involvement with lost and found Airedales, we sometimes hear things that are worthwhile passing on. 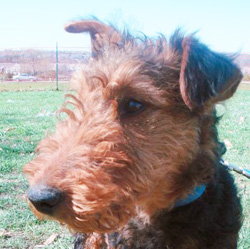 In regards to retractable leashes, earlier this year on the 4th of July, we reported an Airedale as lost when he bolted during fireworks, pulling the retractable leash completely out of the owner's hand. Fortunately the dog was found several days later but the retractable leash was wrapped around the dog and it was severely dehydrated. Had the dog not been found when it was, it may not have survived. We all feared that the dog would become tangled in something and die.

During a discussion of this lost dog, another rescue person added this comment:

"Several years ago, a neighbor got a new dog from a shelter….he weighed about 10 pounds. They had him on a retractable leash and were proudly showing him off to me, at which point the little dog went round and round my leg at the ankle and cut my ankle to bits! Several really deep cuts that took weeks to heal. I was lucky I didn’t get an infection from those deep cuts...almost down to the tendon that is just above your heel.

What most people also don’t realize with those leads is that there is NO control over the dog at all.  If you tried to wrap your hand around the lead like we do with the leather (or even the wider nylon), you would cut your hand to ribbons."

While retractable leashes may have their place, we encourage you to make an informed decision prior to using one for your Airedale.  Below are a couple of Web pages with additional information.