ART: Your puppy is limping...

YOUR PUPPY IS LIMPING!  IS IT PANO?

Your Airedale pup has been growing rapidly, and getting so big so fast!  Somewhere about five to twelve months of age he suddenly starts to limp.  Many times this limping starts on one of the front legs.  You check the paw to be sure there is not a little stone or other foreign object stuck in it.  The leg seems to be visually okay, but there is something wrong.  You go to your vet, and have an x-ray done, but nothing shows up.  The limp may gradually subside, but a couple of weeks or months later he is limping on a rear leg.  Your vet may suggest your pup has Panosteitis and tells you he will outgrow it eventually.

The word Panosteitis can be broken down like this:

Pano (the commonly abbreviated name) is a mysterious disease of unknown cause that appears as sudden lameness in younger dogs of those fast growing medium and large breeds.  Pano is a self-limiting, painful condition affecting one or more of the long bones.  While quite common in the German Shepherd Dog breed, it is also seen in our Airedales.  It generally occurs in puppies around 5 to 12 months of age, although more rarely it can be seen in older dogs as well.  Fortunately Pano is usually gone in a few months, with an average case lasting 2 to 3 months, however other cases may last up to 6 months. Generally starting in a pup when he is between 5 to 12 months, it is usually gone by 18 months of age.

You may have heard of this disease by one or more of the other names that are linked to Pano: such as “puppy limp”, “growing pains”, “long-bone disease”, “wandering lameness” or “shifting leg lameness”.  In my Merck Veterinary Manual, additional names for Canine Panosteitis include: Eosinophilic Panosteitis,  Enostosis, and Juvenile Osteomyelitis. My research also found reports of other breeds that have been affected by this disease in addition to the GSD and our Airedales.  Those include:  Rottweiler, Irish Setter,  Collie, German Short hair Pointer, Doberman, Great Dane, Basset Hound and St. Bernard.  Interesting enough, my research also included it having been found in the Scottish Terrier and the Beagle.

Pano is the inflammation of the membrane surrounding the long bones in the legs of young pups.  It most often affects the shaft portion of the long bones, which are the radius, ulna and humerus of the front leg, and the femur and tibia of the hind leg. Manipulation and palpation of those long bones will produce painful cries from the pup.

This is a painful condition for the pup, with the only medical help being pain reducing drugs which can be prescribed by your vet.  My personal recommendation is to use these drugs with caution.  When used, please use only when absolutely necessary, and if used more extensively, please get periodic blood tests to check liver values.  Educate yourself on the side effects of these drugs so you can choose responsively.

Mild to severe lameness with bone pain that tends to be intermittent and shifting from one leg to another is typical.  It is seen in males about 4 times more often than in females.  The amount of pain/discomfort varies highly from the severity of the disease and also the individual pain tolerance of the affected dog.  The disease can be in one or more bones, which is why you may see the lameness shifting from one leg to another.  There may be days or weeks between episodes.  Individual episodes of lameness usually last from 1 to 2 weeks, however variations in symptoms are wide so nothing is definite. 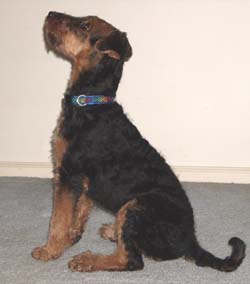 I first learned about Pano in 1990 when my Airedale puppy Maggie developed lameness.  Being an amateur researcher at heart, I discussed this disease with as many Airedale breeders and show dog handlers as I could.  I found most of them dealt with this disease by a change in diet.  They advised changing an Airedale puppy to an adult formula dog food around the age of 4 months.  Puppy dog food formulas are generally quite high in protein and fat, which stimulates growth.  Most Airedale pups grow so fast they don’t need the added help of the high protein formula.  Maggie produced a litter of 10 pups, and I advised my puppy buyers to move their pups to the adult formula at age 4 months. Thankfully none of Maggie’s pups developed Pano.  Would her offspring have developed Pano because Maggie had?  No one really knows, as science doesn’t have those answers yet.  I have also read that raw diet fed pups generally do not suffer Pano, but I’m no expert on raw diets, so I can not say if that has been proven.

Radiography is the only way to definitely diagnose Pano, but it can be difficult as it is not always visible on x-rays.  Most experienced vets can confirm their suspicion by palpitating those long bones.  Inexperienced vets might think rear leg affliction could be an indication of hip dysplasia or cruciate ligament injury.

So how is Pano treated?  Since the cause of Pano is unknown, there is no specific treatment for this condition.  Treating the pet’s pain with drugs is helpful to the pet, but appears to have no influence on the duration of the clinical signs.  The vet’s primary treatment is to minimize pain and inflammation with pain relieving drugs.  When in pain the pup will generally limit his own activity, however, further limiting his activity has not been shown to hasten recovery.  (Subjecting any developing puppy to hard running and extremely long walks is generally not recommended.)  Signs of pain and lameness may last for several weeks.  The good news is that the long-term prognosis for a dog with Pano is very good.  Generally by the age of 18 to 24 months most afflicted dogs have totally outgrown it, with no lasting effects.

I’ve chosen to share this information with our new rescue volunteers to give you yet another bit of information so, if and when you encounter puppy lameness, you will have this knowledge about Pano.  Knowledge is definitely power and the more you know about the dog problems you may come upon in your volunteer travels, the more valuable you will be in your ability to counsel pet owners when dealing with them.    More detailed information does not seem necessary for this column, but if you wish to, you can always do a computer search on “canine Panosteitis” for more information.

I hope you have enjoyed learning more about “puppy lameness.”

ART Newsletter Copyright 2009 by Sally Schnellmann and National Airedale Rescue.  Reproduction in whole or in part is forbidden without the publisher's written permission.